A Texas oil man named Andy SoRelle was busy preparing to drill the Atlit #1 well near Haifa, known as the Asher Project. SoRelle’s well was spudded in February 1981, the same year Jim Spillman’s book, The Great Treasure Hunt,  was released. Spillman and SoRelle were mutual supporters, each understandably interested in the work of the other. Throughout the Asher Project  SoRelle updated Spillman on the progress of the well they both believed would strike the oil God had promised.

At 9,400 feet the drill bit hit volcanic rock.  They drilled down through another 7600 feet before finally coming into limestone again. The drill bit, now at 17,296 feet was way beyond the rig’s capacity. Fearing he would lose the hole, Atlit’s drilling supervisor (a man by the name of John Brown) shut down the operation until a larger rig could be brought in.

Drilling continued without incident until, at 20,570 feet Atlit II struck oil! What oil experts call “very good shows” came to the surface; graded as light oil at 35 to 40 degrees API. SoRelle continued to a final depth of 21,431 feet. The zone of oil bearing rock, was estimated at 470 feet, from 20,570 to 21,309 feet. Two years after spudding, the drilling phase of the Atlit well was finally complete!

During development problems emerged again. Financing for the project had been on a shoe-string at best. The crew had stopped casing the well at 13,772 feet.  Not having funds for additional casing and reasoning that the volcanic rock they had struggled through was stable enough to hold the hole open the crew had continued drilling in “open hole.”

As the crew was cleaning the hole in preparation for the production casing, drill collars stuck at 18,669 ft and two weeks of jarring would not break them loose. Special equipment was flown to retrieve the string (130 ft. in length) and, while cleaning the hole to “fish” with the new equipment they stuck again at the 17,772 ft mark. After ten more days of trying to break loose, they came out leaving another 8 ½ foot fish in the hole.

August 24, 1983, more than two and a half years after spudding, Andy SoRelle called it quits for the Atlit hole.  Having spent more than $25 million, his own money and that of his investors, Andy gave up on the Atlit well.

The history of the search for Asher’s oil doesn’t seem very promising. But if God said of Asher, ‘… let him dip his foot in oil …’ then I’m convinced He’ll keep His promise in His own time. One thing I do know; the oil is down there. Hancock saw it and SoRelle saw it. That Asher’s oil exists is a fact, when it will be brought to the surface is the only question.

But these are just the material facts.  Let's now get to the Scriptural aspects, the scientific aspects of this oil find.

While Andy was mapping the region, he was visited by a group of Rabbis and professors from Jerusalem University.  "Mr. SoRelle," they said, "We think you need to see what  we've discovered."

The Rabbis began to show Andy their discoveries in the Torah.  Once it became clear that Asher's Oil was petroleum and not just olive, it cast some translations of the Hebrew text into a whole new light.  Ironically, it was a scholar whose name was Olive who pointed out some fascinating aspects of Andy's discovery. 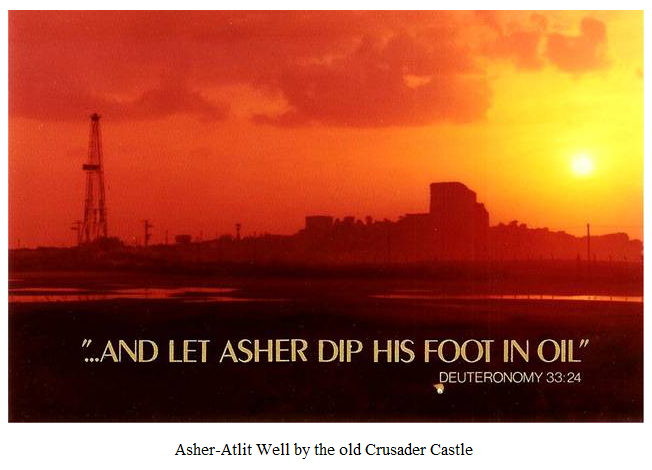 "And of Asher he said, Let Asher be blessed with children; let him be acceptable to his brethren, and let him dip his foot in oil.  Thy shoes shall be iron and brass; and as thy days, so shall thy strength be."

"Mr. SoRelle, whether you realize it or not, you are the fulfillment of Scripture.  You've found oil at the foot of Asher.  Your drilling rig is 'iron and brass.'"

Put the translation from Hebrew of each of the names together in succession as they are recorded in Scripture and it comes out approximately like this: "A foreign association shall come together and shall sink a shaft in Asher, using a cutting tool for cutting hard formations; and will go through a mountain or a high place; and liquid pitch will come forth as a man vomiting. And Asher will be able to lend to his brothers, and Israel will become preeminent amongst nations."

Here's another really cool discovery.  A friend who served in the first Iraq War -- Desert Storm -- had access to the Navy's huge computer.  After analyzing the names of each of the children of Asher, he decided to input the mathematical value of each of the names of the children of Asher. What he came up with was.......20,570!  The depth at which Andy found oil.  You remember, don't you, that every Hebrew letter has a mathematical value?  It is like the ancient Greek language (or actually it's the other way around - smile!)  Put the letters of the names together; add their numerical values together and you get 20,570.

But there's more.  Extract out some of the individual names with their corresponding mathematical value, and you get the exact weight and grade of the oil that came forth.

So, how did all that fit?  Andy definitely had a foreign (American) association.  They sank a shaft in Asher using a cutting tool for cutting hard formations (a drill bit used in digging for oil).  They went through a mountain.  The mountain was hidden because of geologic shifts, but they drilled through a volcanic mountain.  Liquid pitch -- oil -- came forth as a man vomiting.

One more thing: Andrew "Andy" SoRelle's name is Hebrew is.....tum de tum tum.....Asher!  Of course he didn't know that until the Rabbis told him. (smile)

The rest of it.....well, it still remains to be completed.  The Intifada interrupted things, and despite his best efforts to raise the money necessary to sink a producing well, Andy ran out of funds.  He was able to raise enough money to begin another drilling effort in the mid-to-late 1980's, but problems with the drill rig made available to him by the Israel National Oil Company (yeah, they decided after Andy's discoveries to put together a national oil company.) forced a shutdown.  The rig was simply too small for the project.

Ill health caught up with him in the years that followed, and it wasn't until 1995 that he was able to return to try again.  He had raised enough money -- he hoped -- to actually sink a producing well.  Again, mechanical problems and local politics interfered causing costly delays and eventually draining his resources, bringing his third effort to a stop.

It is a promise yet to be fulfilled.  Andy once told me that if he could sink 50 oil wells per year in the region over a 20-year span, they wouldn't come close to extracting all the oil available.

As I recall, it was in 2001 or 2002 that we got a phone call from Maxine asking us to pray for Andy.  He was in the hospital, having suffered a bad fall and a broken hip.  He recovered enough that the doctors sent him home, but again complications from the injury sent him back to the hospital.  Maxine called us some weeks later and we learned that Andy had gone on to be with the Lord.

She shared how that while Andy was in the hospital, the Lord had spoken to him and told him that the Asher project was not his to finish, but that he needed to commission his son, Andy Sorelle III (we all called him "Andy Jr.")  Andy Jr. came into the hospital to see his father and Andy Sr. instructed him to kneel by his bedside.  He placed his hands on Andy Jr's head according to the instruction of the Lord and commissioned him to follow through with the project to its conclusion.

Andy then laid back down in the bed, folded his hands, said goodbye to everyone, and went to be with the Lord.

Andy Junior had been in the oil business like his father, but his activities were in oil and gas law.  Despite his father's commissioning, he somehow never got the same vision.   In the years since Andy Senior’s death, John Brown -- who had been with Andy during his first efforts -- picked up the vision.  The Zion Oil Company was formed, and John Brown picked up the vision and the effort.  Because so many years had passed since Andy's initial find, John sank his own test wells to prove the oil for himself.

Like Andy's successful test efforts which began in 1979, John Brown found the same oil.  In 2006, Zion Oil Company applied before the Securities and Exchange Commission for an IPO of two million shares at $7 per share.  To the best of my knowledge, that IPO was successful and they were able to raise the $14 Million needed for their initial efforts.

That effort resulted in some successes and some disappointments, but -- like Andy -- John is one very determined individual who absolutely believes the Word of God.  More  efforts have followed John's first endeavor, and he will not give up until he sees God's promise fulfilled.  Oil WILL come forth out of Asher just as Moses prophesied.

I spoke with John a few months ago concerning raising money for this vision (and it is certainly one that we share with him).  He cautioned me about having folks involved in the effort who only saw it as a potential money-making venture.  He said to me, "If folks don't have the vision, I'd rather not have them involved.  This is God's doing!  This is His promise and His covenant with Israel.  I really don't want anyone being a part of it who doesn't understand and share the covenant vision.  I believe it is crucial to the future success of our efforts."

Whether it is now, or later, Israel will have such an abundance of oil -- and I am convinced -- that the United States will no longer need to depend on Arab oil to meet its needs.

God made a promise to Israel that "if thou shalt hearken diligently unto the voice of the LORD thy God, to observe and to do all his commandments which I command thee this day, that the LORD thy God will set thee on high above all nations of the earth......

"The LORD shall command the blessing upon thee in thy storehouses, and in all that thou settest thine hand unto; and he shall bless thee in the land which the LORD thy God giveth thee....

You have to have a vision in order to achieve what everyone says is impossible.

Geologists for years had said that Israel either had no oil whatever, or only oil in trace amounts not worth extracting.  Their instruments and their scientific studies backed them up with their claims.  There were no natural oil formations when you take in the geology and geography of the place.  It took a nut case from Houston, Texas -- at least that's what a lot of folks called him -- to demonstrate to them that if the Bible says so, IT IS SO !!

What does God have in store?  More than anyone can possibly imagine!

Christians MUST NOT live at random.  Everything we do is significant.  Beware of the trap of thinking that anything you do is "insignificant."

Again, let me remind you that if you are in need of healing or deliverance from any kind of torment, please join our prayer conference calls on either Monday or Wednesday of each week at 7:00 PM Eastern. Once again, the number to call is (805) 399-1000.  Then enter the access code: 124763#.  To get into the queue for prayer, when Randy opens the call up for everyone, hit *6-1 on your keypad. Let us minister to your need for healing!