Nearly ten years have passed since I first began to share the amazing story of Houston oilman and drilling legend, Andy SoRelle.  Since I first shared this story, there have been many additions as well as parts of the original story that needed to be "fleshed out".

It was twenty years ago this spring that Della and I were first introduced to Andy and Maxine SoRelle.  What we were introduced to was a whole lot more than a couple of very interesting people: we became involved in an adventure that continues to this day.  In order to lay the foundations for the events I'm about to share, let me take you back to WW-II.

Andrew SoRelle III was the third in the lineage of a Texas oil drilling family.  His father and his grandfather before him (each of whom was named, Andrew SoRelle) had become very well known in America's rapidly-developing oil industry.  Their adventures and accomplishments had already made the SoRelle name famous.

Here's an aside to this story.  The unusual spelling with the capital "R" was the result of a squabble among members of the family who had emigrated to the U.S. from France.  To distinguish themselves from the part of the family who became known for their winter sorel boots, as well as the branch that became involved in the elegant (and verrry expensive!) baby furniture, Andy's grandfather (or great-grandfather -- don't remember for sure) changed the way the name was spelled.

Andy grew up in a home where the name of Jesus was a cuss word.  He barely knew who Jesus was.  When America became engaged in WW-II, he enlisted in the Army Air Corps and before long was a fighter pilot providing air support in bombing runs over Germany.  His prowess as a fighter pilot made him the choice of more than one B-24 crew and for a time he managed to return from these bombing runs relatively unscathed.

On one particular return flight to England, Andy's plane got shot, strafed by enemy fire, and he lost his rudder, along with all of his control surfaces.  Now, any of you who are pilots who have flown in either of the Gulf Wars know when that happens, you start speaking in tongues immediately!  If you know the Lord, that is!  (smile)

If God doesn't intervene, you've got maybe a minute to get things right with the Lord before the plane digs a trench in the desert or an oil field, or you wind up as shark bait at the bottom of the ocean.  Andy's growing-up hadn't been Biblically-oriented -- at all -- and the words, "Sunday School," WERE speaking in tongues for him.  Nevertheless, he did what Albert Einstein talked about.

You remember Einstein?  E=mc2?  What most folks don't remember is that he once said, "There is a God-shaped vacuum in every individual that ONLY God can fill."  Andy SoRelle didn't know anything about Einstein's comment and Jesus was more of a historical figure to him but he started screaming out for God to fill the vacuum in his life.  "God, if you are real, and you can get me out of this alive, I promise I will give my life to you."  With mere seconds to go before the fighter aircraft pancaked in some French vineyard, the plane flew into a fog bank and he lost all sense of direction.

For something like an hour, the plane kept flying......in fog.  Not until he neared the airfield in England did the weather clear, and Andy realized that the Lord had literally carried his broken aircraft back across France and the English Channel -- WITH NO CONTROL SURFACES available.   Andy couldn't steer the plane, he couldn't set a compass direction, he couldn't raise or lower flaps -- NOTHING!!  Nevertheless, his plane guided perfectly to the runway, landed, and came to a stop with him safe and sound.

His commanding officer and fellow-fighter pilots looked in disbelief at the aircraft.  His Commanding Officer said, "This is impossible!  This plane can't fly!"  Andy's story, along with accompanying photos of him and the "can't fly" aircraft, made it into numerous newspapers, and finally was published in its entirety in Guideposts' Magazine in the late 1960's.

Despite his prayer in that life-and-death situation, Andy's actual submission and commitment to the Lord Jesus Christ didn't take place for more than fifteen years.  Having grown up in the midst of great wealth and "high society," he was mostly raised by a black nanny.  She DID know the Lord, was Holy Spirit-filled and had a wonderful daily walk with Jesus Christ.  (Della and I got to meet her when she was in her late 80's.)  She began to pray for him, share with him, instruct him (he thought she was preaching :-)) minister to him every chance she got and didn't let up.  When he did commit his life to Jesus Christ, stupendous changes took place in his life.

Andy got baptized in the Holy Spirit -- and DID begin speaking in tongues -- for real!  But that was only the beginning.  Along the way he met Demos Shakarian (who founded the Full Gospel Businessmen's Fellowship International - FGBMFI) and became one of the founders of the Houston chapter of the fellowship.  His involvement with the Full Gospel Businessmen opened up many doors of opportunity for him as an oilman.

His reputation as an oilman was already well established, but when Shell Oil heard about some of his adventures and successes, they came to him with a serious problem.  They had found what looked like a likely oil field off the coast of Louisiana and initiated drilling.  The problem was that no one up to that time had ever successfully gotten through the Louisiana sands without having to deal with the issue of the fresh water that would play havoc with the process.

Andy said that he had a specific answer from the Lord as to a drilling site and Shell Oil funded the project.  After days and weeks of fruitless results, Andy stayed with it and wouldn't give up.  His efforts resulted in what became known in the oil industry as "the Shell Miracle."

If my recollection is correct, it was in the mid-to-late 1970's when he and Maxine were in Tel Aviv, vacationing at the Sheraton Hotel.  One morning, he opened his Bible to a strange verse of Scripture in

"Let Asher be blessed with children; let him be acceptable to his brethren, and let him dip his foot in oil."

It struck him as really odd, so he said, "Lord, are you saying that there is oil in

Israel ?"  Considering that he was in Israel, he decided -- just for grins -- to take a look at an old Biblical map to see where the ancient boundaries were for the tribe of Asher.  Turns out that those boundaries made Asher look like a boot.  The toe of the boot fell just south of present-day Haifa where many of the Hezbollah rockets have been falling, and where Hamas has succeeded in reaching in the past few weeks (albeit unsuccessfully because of Israel's Iron Dome defense).

Being something of an adventurous type, Andy decided to spend some of his own fortune and do some test drillings in the area.  After some wrangling with the Israeli government -- whose Minister of Energy thought the whole idea was a crackpot idea -- for nearly three years, Andy was finally granted a drilling permit, and in 1979 began drilling at the very edge of the geographical toe: at the River of Crocodiles.

Andy had to be an adventurer.  After months of drilling, broken drill bit after drill bit because of volcanic material he kept running into, he was finally down to 13,000 feet.  Out of pipe (casing), and having spent more than $8 Million, some of it his own money, not to mention some investor funds, his crew said to him, "Andy, it was a good try.  Sorry it didn't work out."

Now this was a crew that had been with him for many years -- the same crew, in fact, that had been with him for the "Shell Miracle" -- and had seen him come through some amazing circumstances and obstacles to find oil in the most obscure places.  Nevertheless, experience told them they had spent a lot of time and money for nothing.  Andy had simply misread the Scripture.  That passage certainly didn't mean petroleum oil.  It was a reference to olive oil.  That was the kind of oil that Asher was known for historically.

Funny, isn't it, how we let our education and experience, and our book learning get in the way when we ought to be listening to the Lord.  But Andy didn't.  This is a spiritual principle that many folks have lost sight of.  We tend to get in the habit of eating from the Tree of the Knowledge of Good and Evil.  Get it?  If something is "good" by our estimation or past practices, then that simply must be the thing to do!

If we see something as "bad" or even "evil" based on our understanding and/or past experiences, then by all means we need to avoid it and do what seems "good."  Trouble is, we are acting based on humanly acquired knowledge, NOT based on revelation which has come by the Spirit of God.  And that gets us in trouble more often than not!

For Andy, he'd seen and he'd heard the Word of the Lord.  It was absolutely lodged in his spirit.  Reading that scripture in Deuteronomy rang as rhema in his whole being.  "Fellas, we're staying with it.  Just keep drilling.  It's volcanic, so the material is hard enough to stay together without having to run casing."

OK.  The boss is nuts, but he's paying the bills. 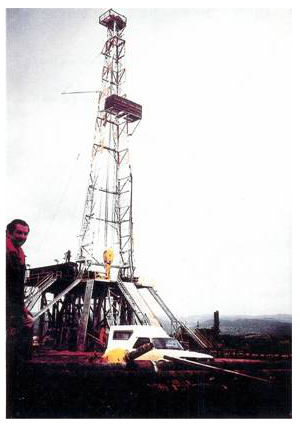 The oil was so pure, it was the color of honey.  I know.  Della and I have both seen samples of it.  As soon as I saw the sample Andy showed me, I said to him, "Andy, it sure gives you a whole new take on "a land flowing with milk and honey."

Ahhh.....but we haven't even scratched the surface.

Andy had spent some $13 Million by this time -- a good chunk of it being investor capital -- and he didn't have much left.  So he picked up the equipment and headed back to the U.S. to see if he could raise some money to drill some producing wells.  Of course there had to be geological analysis of the region in order to demonstrate the viability of such a project.  Andy went back to the area in the early 1980's with some experimental sounding equipment developed by another friend of ours, (I've already talked about him several times) the scientist, Dr. Joseph O'Neil.

As they began to map the oil deposits, they realized that they were sitting on top of a world-class find.  The pool extended out under the Mediterranean for more than a hundred miles.  It traveled through a fault line under the city of Haifa across northern Israel, gradually rising in Jordan and reaching into Iraq. Turns out this pool of oil was the primary source of the oil for some of the Middle East's major oil producing countries.  (Whewww.....talk about the politics of the situation!!!!!)

There's a whole lot more to this story, and we'll pick it up here next week.

Let me remind you that if you are in need of healing or deliverance from any kind of torment, please join our prayer conference calls on either Monday or Wednesday of each week at 7:00 PM Eastern. Once again, the number to call is (805) 399-1000.  Then enter the access code: 124763#.  To get into the queue for prayer, when Randy opens the call up for everyone, hit *6-1 on your keypad. Let us minister to your need for healing!