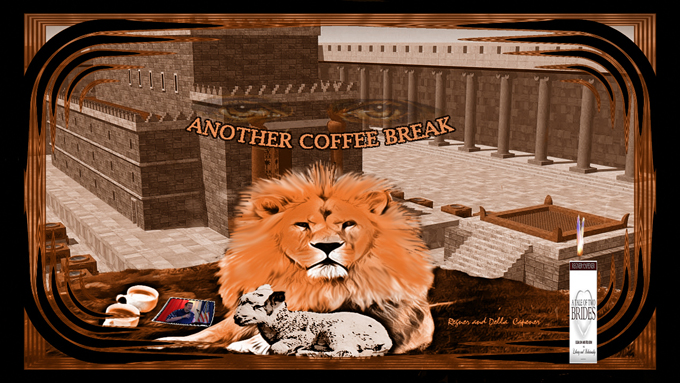 We may run long today as we wrap up this series, so let's get right to it.

Here again is the amplified and re-translated portion of this passage from Matthew 5:14-16:

[When I said, “Light be,” that was the light that brought this world into being. I AM that light.] (Because you are in me, and I AM in you, you are — likewise — the light of this world. That is a light one cannot hide.

[As representatives of the New Jerusalem] you are like that City which is elevated on a high hill or mountain and cannot be hidden from view. (You have been made and destined to be visible to this world.) (Matthew 5:14, RAC Translation & Amplification)

No one lights a candle, and then hides it under some kind of covering or utensil. Rather, they put the candle on some kind of lampstand or decorative piece in order to elevate it so as to give light to the whole room.

Let that light (My light) which is in you, therefore, radiate brilliantly in front of all men and women so that the value of your relationship with and in Me — manifested in the works, the signs and wonders — is demonstrated. That, in turn, will cause Father in Heaven to receive glory and honor and praise!(Matthew 5:15-16, RAC Translation and Amplification)

We were in the midst of a true story last week about an atheist professor stuck with theories of duality who was doing his best to convince his students that faith was ethereal, that God is both good and bad, and that light and darkness both coexist. Let's finish that story today.

'What about darkness, professor. Is there such a thing as darkness?'

'Yes,' the professor replies without hesitation. 'What is night if it isn't darkness?'

'You're wrong again, sir. Darkness is not something; it is the absence of something. You can have low light, normal light, bright light, flashing light, but if you have no light constantly you have nothing and it's called darkness, isn't it? That's the meaning we use to define the word. In reality, darkness isn't. If it were, you would be able to make darkness darker, wouldn't you?'

The professor begins to smile at the student in front of him. This will be a good semester. 'So what point are you making, young man?'

'Yes, professor. My point is, your philosophical premise is flawed to start with, and so your conclusion must also be flawed.'

The professor's face cannot hide his surprise this time. 'Flawed? Can you explain how?'

'You are working on the premise of duality,' the student explains. 'You argue that there is life and then there's death; a good God and a bad God. You are viewing the concept of God as something finite, something we can measure. Sir, science can't even explain a thought. It uses electricity and magnetism, but has never seen, much less fully understood either one.

'To view death as the opposite of life is to be ignorant of the fact that death cannot exist as a substantive thing. Death is not the opposite of life, just the absence of it. Now tell me, professor. Do you teach your students that they evolved from a monkey?'

'If you are referring to the natural evolutionary process, young man, yes, of course I do.'

'Have you ever observed evolution with your own eyes, sir?'

The professor begins to shake his head, still smiling, as he realizes where the argument is going. A very good semester, indeed.

'Since no one has ever observed the process of evolution at work and cannot even prove that this process is an on-going endeavor, are you not teaching your opinion, sir? Are you now not a scientist, but a preacher?'

The class is in uproar. The student remains silent until the commotion has subsided.

'To continue the point you were making earlier to the other student, let me give you an example of what I mean.' The student looks around the room. 'Is there anyone in the class who has ever seen the professor's brain?'

The class breaks out into laughter.

Now the room is silent. The professor just stares at the student, his face unreadable. Finally, after what seems an eternity, the old man answers.

'I guess you'll have to take them on faith.'

'Now, you accept that there is faith, and, in fact, faith exists with life,' the student continues. 'Now, sir, is there such a thing as evil?'

Now uncertain, the professor responds, 'Of course, there is. We see it every day. It is in the daily example of man's inhumanity to man. It is in the multitude of crime and violence everywhere in the world. These manifestations are nothing else but evil.'

To this the student replied, 'Evil does not exist sir, or at least it does not exist unto itself. Evil is simply the absence of God. Just like darkness and cold, evil is a word that man has created to describe the absence of God. God did not create evil. Evil is the result of what happens when man does not have God's love present in his heart. It's like the cold that comes when there is no heat or the darkness that comes when there is no light.'

The professor sat down.

The student’s name — (and this attribution is in dispute): Albert Einstein.

My apologies for such a lengthy story, but the picture painted here in this discussion with the professor highlights the problem our modern believers have with the concept of us being “the light of the world:” duality!

Skip ahead with me in Jesus’ “Sermon on the Mount” to look at how He amplifies and clarifies His statement that we, as His brethren — heirs and joint-heirs with Him, are “the light of the world.”

Because much of this terminology is a series of Hebrew metaphors (albeit translated into Greek), let me re-translate this passage and amplify it from the metaphors.

“The place and means of revelation, knowledge and understanding is that window into our soul we refer to as “the mind’s eye.” So long as you discipline your mind to receive only, and focus on, that revelation which comes from and through the Spirit of God, your entire being will be filled with, and radiate, that light which brings the presence and revelation of Father God.

“If, however, your “mind’s eye” is darkened and blinded to spiritual revelation which comes from and through Holy Spirit, and willfully makes itself ignorant of the things of God while pursuing ungodliness and moral depravity, your whole being will exist in “information-based” spiritual darkness.

“If, as a consequence, all that you have taken into your being is information (which pleases your flesh) devoid of revelation by the Spirit of God, then how great (and consequential) is that darkness and ignorance of divine things, along with its associated wickedness!” (Matthew 6:22-23, RAC Translation & Amplification)

Deuteronomy 28:29: And thou shalt grope at noonday, as the blind gropeth in darkness, and thou shalt not prosper in thy ways: and thou shalt be only oppressed and spoiled evermore, and no man shall save thee.

Quite obviously, this was a reference to “the light that is in thee” being darkness!

We will cover this in greater depth in the weeks to come, but let’s get back to the truth that underlies all these Scriptures we have discussed thus far.

John 8:12: Then spake Jesus again unto them, saying, I am the light of the world: he that followeth me shall not walk in darkness, but shall have the light of life.

In any case, Jesus used the occasion to draw some metaphors that they would easily relate to.

John 9:3-5: Jesus answered, “Neither hath this man sinned, nor his parents: but that the works of God should be made manifest in him. I must work the works of Him that sent me, while it is day: the night cometh, when no man can work. As long as I am in the world, I am the light of the world.”

Are you seeing the metaphors? Here’s the first one.

“I must work the works of Him that sent me, while it is day.”

In other words, “I have to do those things that Father sent me to do while the time of revelation is still available to those whose spirits and mind are open to see and understand the revelation.” (John 9:4, RAC Translation & Amplification)

Then He follows it by saying this:

“A time is coming when My Spirit will no longer be here and available to bring revelation and understanding to those who are spiritually blind; and when that takes place no one will be able to share truths in such a way that those outside My Kingdom will be able to receive and respond.

“As long as I am present in the world (whether in person or in my onoma) — by and with My Spirit moving through you — the light and life and revelation of all that I am continues to be available.” (John 9:4-5, RAC Translation & Amplification)

Take another look at what we’ve just heard and seen Jesus say:

There's still more to go in this discussion. I thought maybe I could wrap this up today, but there's just too much to share, so let's leave it here for today and come back to it next week.