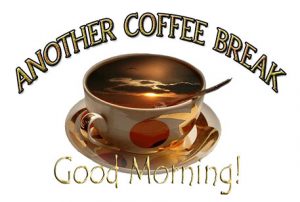 Before we pick up where we left off last week, let me share one aspect of the folks’ ministry that I overlooked before we started talking about Saint Paul Island.

After building and establishing the churches along the arctic coast -- first, Nome, then Barrow, then Kaktovik on Barter Island, then Wainwright, and then Point Hope (not counting designing the churches at Nuiqsut and Atqasuk and ordering the building supplies), the Assemblies of God decided that Dad needed to become an official Presbyter.  (The word comes from the Greek, presbuteros, which is often translated as "bishop.")  That meant that Dad not only continued to pastor the church fellowship at Point Hope (and I've shared that story with you), now he traveled back and forth to each of the villages and towns to look in on the spiritual growth and development that was taking place in each community.  We'll talk more about this a bit later.

I've already noted that Mom was a first-class chef, baker, and possessed a set of culinary skills that would make most 4- and 5-star chefs envious.  In the same way that Dad passed on the skills, the work ethic, and the spiritual muscle he possessed to Chris, Mom passed on her skills to Melodie.

Melodie struggled a bit more than Chris being away from the rest of the family, but the things she learned from her grandmother have stood her in good stead in the years since.  I've never quite understood what triggered the career shift in Melodie, but after utilizing what she had learned from Mom, then honing those chef's skills in a cooking college (guess that's what you'd call it!) and working for a couple of years as the head chef in a 4-star restaurant in Bellevue, Washington, she suddenly switched over to health care where she has spent the last 25-or-so years.

Mom was one of those folks who needed to be busy all the time.  She was born with creative skills and abilities and her juices really flowed when she was creating, fixing, drawing, modeling (clay), decorating, doing flower gardens and landscaping.  That, she passed on to Melodie, in addition to her cooking skills.  It has been the hallmark of Melodie's life since, and she has become something of the same kind of workaholic -- always needing to be busy.

The prophet Isaiah declares the Word of the Lord when he says, “And all thy children shall be taught of the LORD; and great shall be the peace of thy children.”     (Isaiah 54:13)

That's a promise the Lord has given us concerning each of our children -- and our grandchildren and great-grandchildren.  Chris and Melodie were certainly taught of the Lord during those few years at Saint Paul Island.  It is a dividend we rejoice over, and yet there is much more to come!  We've seen Melodie begin to flower spiritually in recent months, and we know that the seed planted in her is bearing fruit with demonstrable results.

Let’s back up some 40-odd years in time for a few minutes.

Romance and courtship always seemed to be part of the ongoing ministry of Alvin and Lorraine Capener.  Funny thing.  When you consider the very prim and proper courtship that began their marriage, you might not particularly expect romance to be a hallmark of their lives.

Alvin Capener met Lillian Lorraine Lehtosaari at what was then known as Northwest Bible Institute.  He was ministering in Ilwaco, Washington at the time, and his co-worker in ministry was a fellow by the name of Magnus Udd. (Magnus later went on to be a missionary in Africa.)  On the day he met Lillian Lorraine, he came home and said to him, "Well, Magnus, I met my wife today."

For a guy who was more known for his very ultra-conservative demeanor and personality, the remark was in stark contrast.  Nevertheless, after a five-to-six month, mostly-by-mail courtship, Alvin Capener and Lillian Lorraine (Dad always called her by her middle name (never figured that one out) Lehtosaari were married.  It was a marriage that would last for some 45 years prior to Dad's home-going -- a marriage that constantly displayed romance.

After 40-plus years of married life, Mom still plopped herself down in Dad's lap while they did the "huggy-kissy thing."  It was a constant mark of their relationship, and they thought nothing of it even in the presence of folks who were part of the various churches they pastored -- and the international guests they hosted while on Saint Paul Island.

I doubt I could count all the people whose lives and marriages began under the watchful eye of Alvin and Lorraine Capener, but one marriage that made the national press stands out in particular.

Modoki Masuda was renowned as one of Japan's most famous wild-life photographers.  Visiting Saint Paul Island as a part of a world-wide photo-shoot of exotic birds and animals, he wound up renting a motorcycle, and then staying in the home during his time on the island.

Not only was the Gospel ministered to him, the unabashed romance between Dad and Mom had a deep and powerful effect.  Modoki had begun romancing a colleague in Japan -- mostly at a distance -- during his travels.

After he left Saint Paul Island to continue his travels, he corresponded regularly with the folks and began talking to them in his letters about his prospective bride.  The day came some two years later when he decided that he wanted Dad to perform his wedding at Saint Paul Island.  Modoki Masuda flew his bride-to-be, her family, and his family to the island for the wedding and reception. 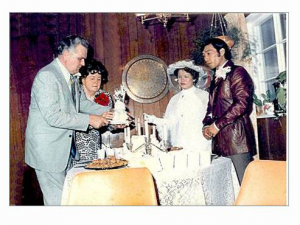 Had Mom known months in advance to prepare for the wedding, she couldn't have been better prepared.  She had spent the spring and early summer planting wildflowers of many varieties around the church and the house, and when the wedding day came, there were literally thousands of arctic poppies, lupine and forget-me-nots in bloom.  It created a stunning visual for the wedding.

The photo above was taken at the reception following the wedding.  Dad and Mom were serving Modoki Masuda and his new bride their first piece of wedding cake.

Both of Anchorage's newspapers covered the event and the photographer -- another Japanese wildlife photographer from Osaka who happened to be on the island -- who took photos of the wedding saw his pictures published in magazines and newspapers in Japan.

Although the next picture doesn't really do justice to the floral arrays that existed (beside the fact that the photo was taken on a cloudy day) when the Masuda wedding took place because this picture was taken later in the year after most of the flowers were gone, it does give you a taste of the flora and fauna that surrounded the church at Saint Paul Island. 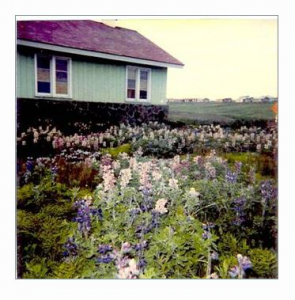 Saint Paul Island had never had a grander, nor more colorful event, and this one drew the town.  We arranged to send out a special bouquet of flowers from Anchorage, and the Reeve Aleutian Airways stewardess hand-carried them to the wedding.

The very positive attention this event gained for Saint Paul Island did a lot to endear Alvin and Lorraine Capener to the islanders, and it would become one in a series of episodes leading to an exceptionally rare honor by the Aleut people given to Dad less than two years before his death.

If I have spent more time dealing with the ministry of Alvin and Lorraine Capener at Saint Paul Island, it is because they spent more time there than any other place in all their years of ministry.  Though the church at Saint Paul never reflected (in terms of attendance) the actual gains and impact of the Gospel of Jesus Christ that they preached, this was easily their most profitable period of ministry -- mostly because of the fact that they were able to reach out to people from around the nation and the world who would never have otherwise heard the Gospel.

The island became a pulpit all by itself.  From a practical standpoint, it is likely that no one could measure in numbers the people whose lives were changed.  In the years since the deaths of both of my parents, I have heard from people from many nations and cities around the world who visited Saint Paul Island during the late 1960's all the way up to the year 2000 and came to know and accept Jesus Christ as their personal Lord and Savior as a direct result of hearing the message of salvation through one or the other (or both) of my parents.

Ministry like that does not come without a cost -- and great personal cost, at that!  The apostle Paul expressed it like this:

II Corinthians 11:22-28: “Are they Hebrews? so am I.  Are they Israelites? so am I.  Are they the seed of Abraham? so am I.  Are they ministers of Christ? (I speak as a fool) I am more; in labours more abundant, in stripes above measure, in prisons more frequent, in deaths oft.  Of the Jews five times received I forty stripes save one.  Thrice was I beaten with rods, once was I stoned, thrice I suffered shipwreck, a night and a day I have been in the deep;

Obviously the apostle Paul endured things none of us can even imagine as he pursued to his death the burden of ministry laid upon him. Even so, he wrote the following:

Acts 20:24: “But none of these things move me, neither count I my life dear unto myself, so that I might finish my course with joy, and the ministry, which I have received of the Lord Jesus, to testify the gospel of the grace of God.”

No testimony could better describe Dad & Mom’s stance. Despite constant peril, despite the ignorant opposition of brethren and fellow-ministers of the Gospel, despite political opposition and personal slander against them, the (literal) rock-throwing, despite the weariness of having to spend (at least in the arctic) not less than 75% of all physical effort and time just taking care of the necessities to survive the harsh climates, the physical deprivation endured from time to time — not to mention the constant demands on their time for personal ministry — were you to ask, they would have said, “What does that have to do with anything?  Our lives are here for the Lord to spend as He sees fit so that He receives His reward.”

This is a good place to stop for today.  We’ll pick it up again next week.