Let’s be different today and begin this Coffee Break with some pictures of the Island of Saint Paul.  This first photo shows the main part of the community.  To the far right in the picture is the Capener home.  What you see represents about a third of the overall City of Saint Paul. 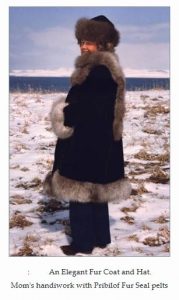 As we were wrapping up last week’s Coffee Break, we said that as islanders began to make their relationship with Jesus Christ more and more public, breaking away from their regular attendance at Russian Orthodox church services and functions and coming to the services and gatherings at the Assembly of God church, they became the focal point of persecution and ostracizing -- something they had once been a part of themselves.

One by one, these folks left the island, moving to Anchorage or other parts of Alaska -- and some even moved to the Northwest (Washington, Idaho, Oregon, Montana, etc.)  This is a bit out of sequence in the timing of our storyline, but I never realized the extent to which islanders had left Saint Paul and moved elsewhere until I was preaching my mother's funeral in early October of 2000, and former Saint Paul Island residents showed up at her funeral -- some of whom were in the ministry in other parts of Alaska.  They shared with me how the pressure to return to Orthodox traditions was so great they felt they had to leave the island in order to have the liberty to serve the Lord without interference. 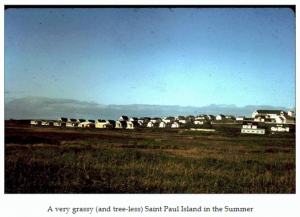 But the Aleut people of Saint Paul Island were not Dad and Mom's only congregation.   So long as the island was under supervision of NOAA and the U.S. Department of Fisheries, the Fisheries personnel became regular attendees at mid-week and Sunday services.  The Coast Guard Loran station -- which was about four miles from the main part of Saint Paul's population -- was staffed with roughly a dozen personnel, and several of those men became an integral part of the church.

During the Second World War, the island had been an early warning outpost for the U.S. Army.  When the War ended, and the military abandoned its facilities on the island, they were turned over to the U.S. Weather Bureau.  In succession for almost 30 continuous years, the Weather Bureau personnel -- sometimes consisting of whole families -- were a major part of the backbone support for Dad and Mom and the church at Saint Paul Island.

It just seemed to work that way.  The Weather Bureau personnel assigned to the island all were either committed Christians prior to their arrival on the island, or they became committed while sitting under Dad's ministry.

Sometime after Dad & Mom arrived on Saint Paul Island (the exact length of time is a bit hazy in my memory) -- and they had been using the rather spacious living room of the home as a meeting place -- Dad felt the need to construct an actual church building.  The living room simply wasn't cutting it, and the gatherings had grown to the place that using the house was becoming impractical.

He voiced his desire to build a new church building to a few folks in some (mostly-) private letters.  Immediately he received a letter from Erwin Anderson -- Yup, the same guy who'd helped so many times in the past, and the same guy who had been part of Dad's very first ministry in Ilwaco, Washington -- indicating that if he would let him know how much he needed in building materials, they would be packaged and put on the next ship.

The design for the house was pretty much along the same lines Dad had designed every previous building for Barrow, Wainwright, Point Hope, Nuiqsut, Atqasuk, and Barter Island.  Change was in the works, however.  A radically different design for the church building popped into Dad's spirit, and he went to work on a design that would be both cost-efficient, and yet striking in appearance -- at least in terms of building architecture at Saint Paul Island.

I don't have time or space in today's Coffee Break to show you some other photos from Saint Paul Island -- they'll wait until next week -- but the new church building for Saint Paul would seat roughly a hundred people comfortably, and that was ambitious (or perhaps far-sighted) in terms of the size of the church congregation.  Always the decorator, Mom decided this church needed some nice outside touches -- touches that would be both decorative and have practical value as well.  So she drove all over the island finding rocks that would have just the right shape to construct a rock-work wainscot exterior.  It took several months to find all of the rocks -- and several more months to carefully put the wall together. 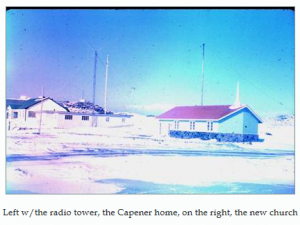 Though the interior of the church was nice, the furnishings were pretty Spartan.  Robert Sistrunk, the local Weather Bureau chief at the time, had become very close to Dad and Mom.  He decided one day that the church needed furnishings to match its otherwise graceful appearance, and told Dad that if he would order some nice oak church benches, altars, pulpit and matching chairs for the platform and let him know what the total cost plus shipping would be, he would write out a check to cover it.

Thus it came about that the church at Saint Paul Island -- despite its diminutive size -- became the showpiece of all the churches the Capeners built and established throughout more than 40 years of ministry.

The aforementioned Robert Sistrunk had come to Saint Paul Island calling himself a Christian.  The ministry that Dad & Mom poured into him during his years on the island so impacted his life and caused such spiritual growth that he considered them his spiritual parents.  Years after he had left the island he was still in constant contact with them.

One day, Robert decided that Dad needed something more practical to move about the island than the old, dilapidated Rambler station wagon and rusting out Ford pickup.  (Both of those vehicles were battered from the constant wind and rain and blowing scoria (not to mention the heavy use in tasks for which they were never intended), and though they weren't all that old in terms of years, looked like they'd been in service for dozens of years.)

Without any forewarning, he shipped in a Honda 90 trail bike and had it delivered to them.  He had no clue what an impact that simple gift would be -- not only to Dad and Mom, but to their ministry to the young people of the island.  Not long thereafter, Robert decided they should each have a three-wheeler, and had two shipped in and delivered.

No one on the island had three-wheelers or dirt bikes, and seeing the folks running around the island easily getting to places that were normally accessible only on foot suddenly became an attraction.  Young teenage boys came around begging Dad to let them "rent" the bike or the three-wheeler.  No sooner had he rented to the first boy ($2.00 per hour) when he had a lineup of boys who would stand around and wait until the previous renter's hour was up.

All of a sudden, Dad had a fistful of young boys, ranging from eight years of age to 15 and 16, who hung around hour after hour after hour.  It was a built-in opportunity to talk to them about the Lord Jesus Christ.  You'd rarely ever see these boys in church under any normal circumstances, and despite the fact that they might answer when questioned, "I'm Russian Orthodox," they really had no clue what that was, and had zero knowledge of the Bible or the Word of God as it applied to them.

Dad wasn't preachy.  He never "sermonized" in his conversations with the boys but found ways to carefully and casually talk about the love of the Lord and to draw the boys into conversation.  It didn't happen overnight but over a period of weeks, months and years, many of these boys -- and before long, girls -- began to kneel in Dad's garage and accept Jesus Christ as their personal Lord and Savior.

Remember the boys who were part of the rock-throwing episodes?  They were also among the renters, and some even among those who accepted Jesus Christ.  Next week, I’ll show you a photo of some of the kids who rented those dirt-bikes.

Have to pause here to share something I think I missed in earlier Coffee Breaks.  In the late 1970’s when I was being persecuted and attacked in Barrow because of the expanding ministry of deliverance, three of our children became the targets of attacks in an effort to drive me from the community.  Chris (Christian) and Melodie were sent to Saint Paul Island to be with my parents in order to get them away from the constant attacks.

Dad’s ministry with the Honda 70’s, 90’s and three-wheelers was just expanding.  Chris became Dad’s mechanic-in-training and discovered he had a gift for understanding small engines and repairing them.  As a result, Chris developed friendships with many of the boys who had been some of the erstwhile rock-throwers, and those friendships developed into long-term relationships.  At the same time, whenever one of the boys would have a mechanical problem with one of the bikes, Chris was johnnie-on-the-spot to fix the problem.  It only added to Dad’s opportunity to minister to the boys.

But the expanding ministry with the bikes and three-wheelers spread to tourists who visited the island, the local weather bureau families and Coast Guard personnel who saw bikes as an opportunity to explore the island in ways previously impractical, as well as two extinct volcanic cones.  Now this unorthodox (pun intended) ministry was about to take a turn no one could have predicted.

Guess I need to hold the continuation of this story for next week.  See you then.